In the midst of a dusky winter’s afternoon in Glasgow’s Gallowgate, surrounded by establishments selling rolls of carpet and vinyl flooring – last chance! half price! whelk shops teeming with critters, African salons and those distinct and timeless voices carried along high above the stalls, 'get your bacca here', 'cds, three for a fiver' sits a glowing gem of a place, Soul Food Sisters. 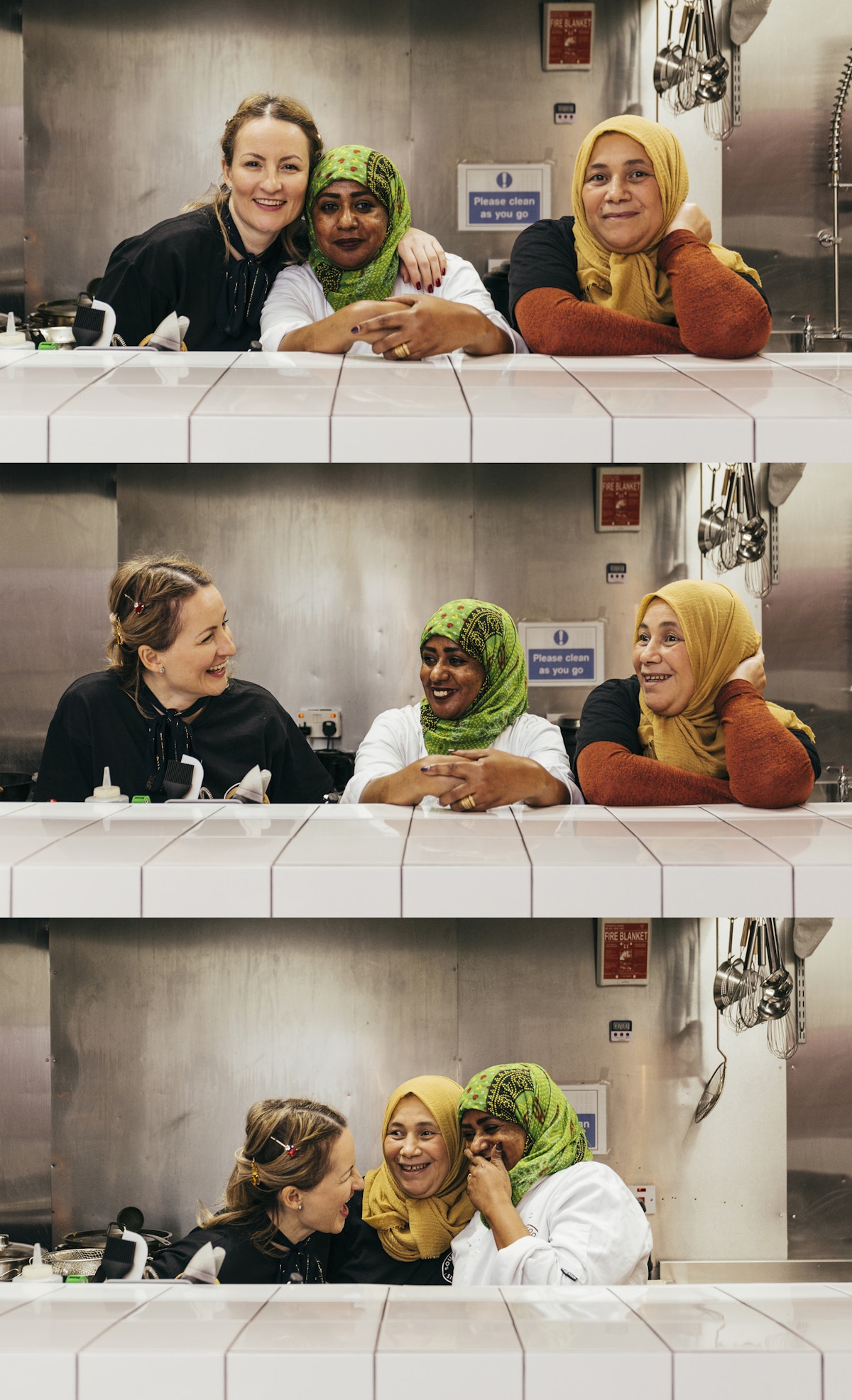 Beneath a deeply shaded December sky, its windows steamed up with condensation and warmth emanating from its interior, it beckons with scents of spice and coffee and the chatter of female voices. 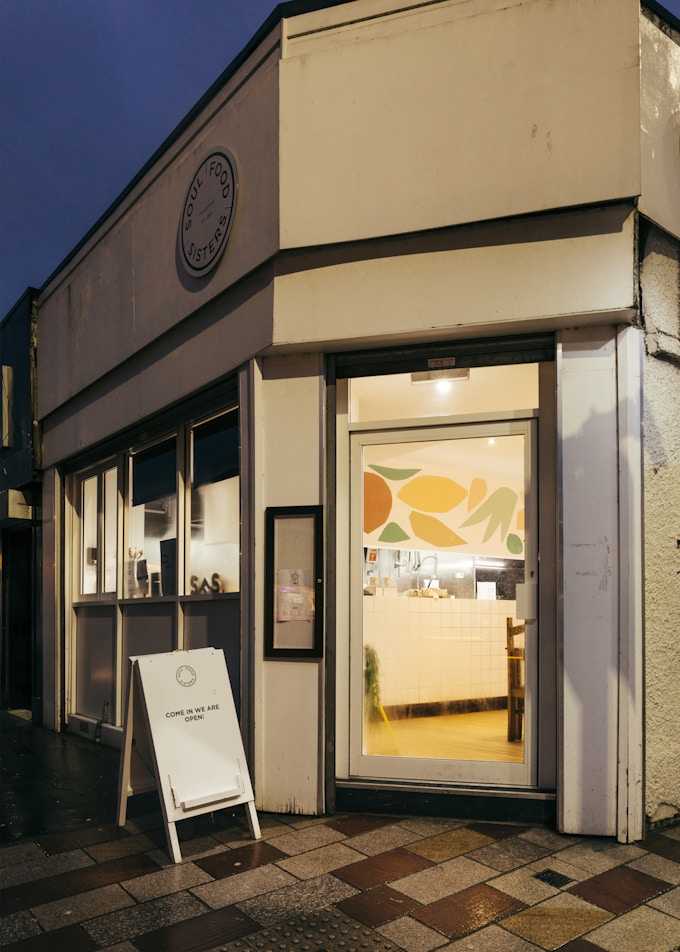 Soul Food Sisters is a recent addition to this stretch of the Barras – it’s a women only run catering company, a collective, a community and, since February 2019, it’s opened its doors for the first time as a café, serving a daily rotation of varied and delicious international food. It is run by a group of like-minded women who have come to live in Glasgow from all over the world, from countries as diverse as Algeria, China and Spain and whose common aim is to connect, support and train women through making, sharing and enjoying food as well as providing culinary pleasure to the customers who come to eat at their table. 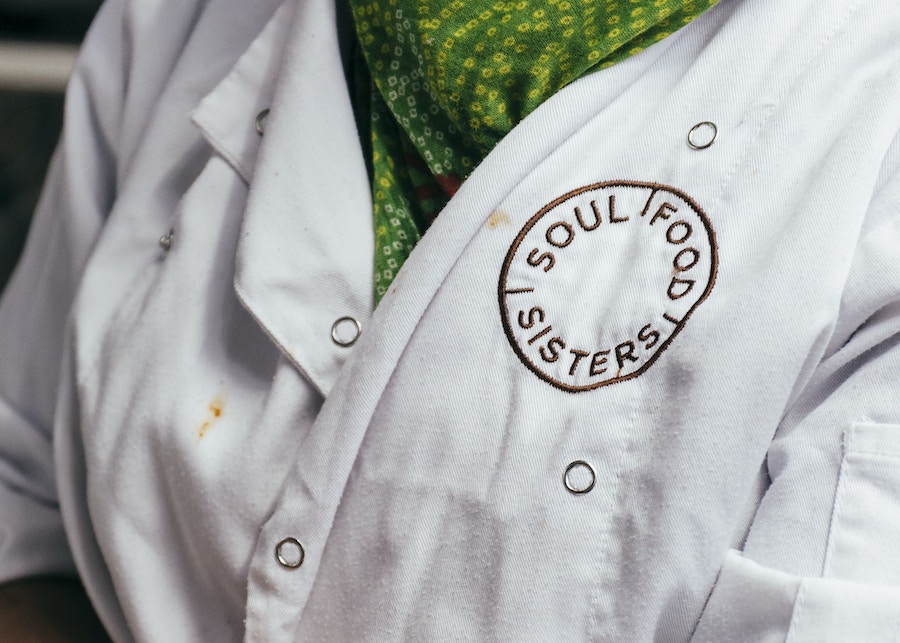 Soul Food Sisters roots grew not here in the east end however, but in the city’s Southside, in the Hidden Gardens of Glasgow’s Tramway, where in 2012 a group of women would meet at cookery classes to share their experiences of moving to a new city and, often, a new life through a shared love of food. Educated and capable but without the recourse to immediate jobs or resources, they realised that cooking and food had a liberating and levelling effect, one that had the potential to free them from the possible isolation of home life and childcare in a country not yet their own. And so, Soul Food Sisters was born of these like-minded women and quickly became an outside catering company based in the Kinning Park Complex, becoming a means to empower and engage women.

Seven years later the collective has grown and there are now ten soul food sisters working from this corner café on the Gallowgate as well as volunteers, making food for outside catering orders large and small and on Saturdays and Sundays, for the lunchtime customers who stream through their doors. They also offer hands-on workshops for the culinary curious in various national specialities: Lebanese cookery, Algerian couscous and Polish bread making classes have all featured. Djamila Siagh, originally from Algeria, joined in 2014 whilst a member of a refugee women strategy group. A Clinical Psychologist by profession, she came to Glasgow for work and she now helps run the business, working with local community groups and charities to deliver healthy cookery workshops in Glasgow’s east end primary schools and to adult outpatients in Edinburgh via the charity Artlink.

For Djamila food has a unique potential to both empower and connect people, "food is just amazing. It’s just like art, how food brings people together. People are busy but when they come together at the table they can share their knowledge, experiences. So I feel food is a great way to bring people together and to break isolation. Most people working with Soul Food Sisters are single mums, they have faced some difficulty either with their kids, their husband or their country of origin. Some people have been forced to leave their country and come to Glasgow most of them feel that this is their home". 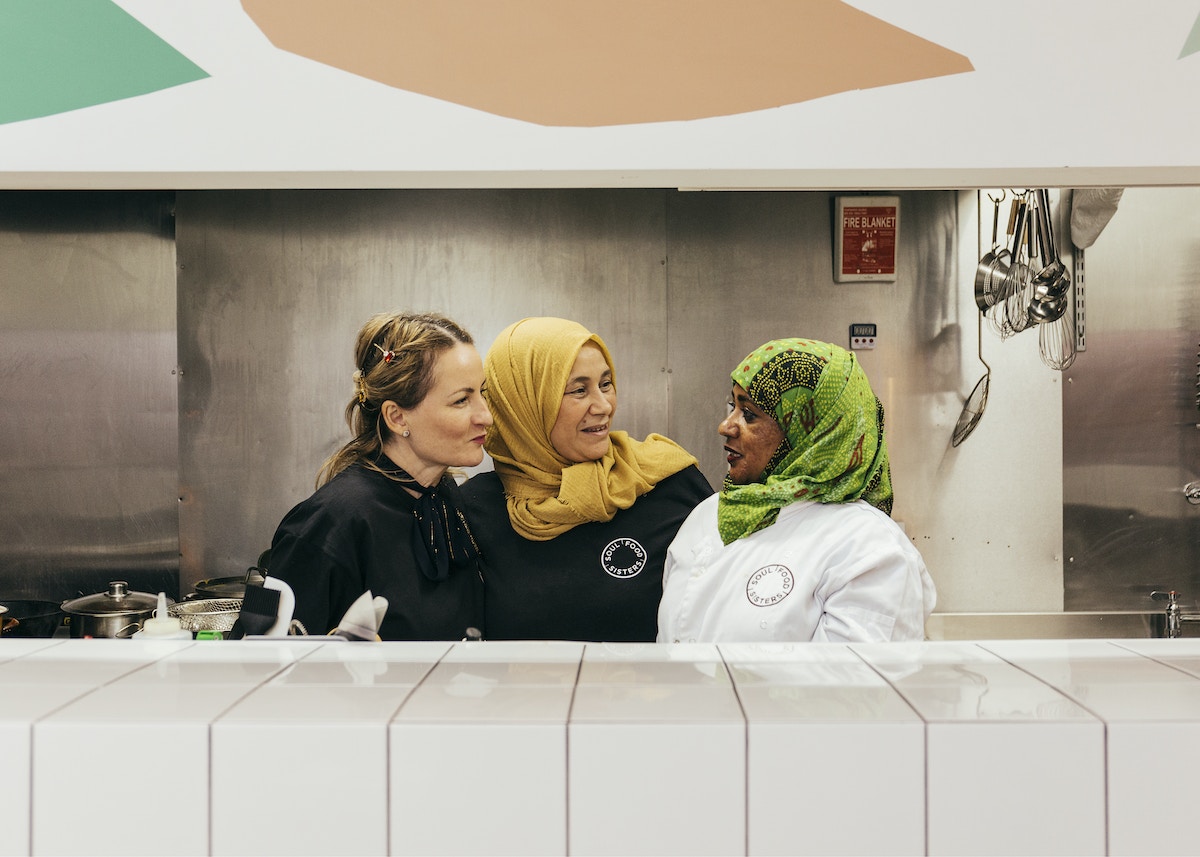 Food, for Soul Food Sisters is an international language which everyone can speak. 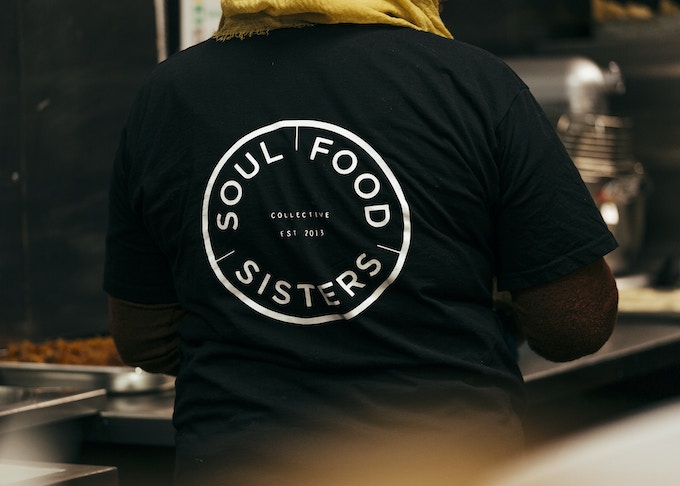 Djamila explains “We know there are obstacles, especially for women, they are struggling. Statistics are increasing dramatically around mental health. There is something wrong somewhere. We try very hard to see what we can offer, how we can bring these people out and discuss and make life better, easier, for people here.”

Through funding from Foundation Scotland, Soul Food Sisters has been able to offer training opportunities such as food hygiene courses and paid work to women, arming them with new skills and jobs. Djamila explains “The process of training and empowerment has made a big difference to the women, people before were just staying at home. Since we started this project many people have had the benefit of this training. Most of them are working and have gained other skills. It’s been very beneficial.”

The benefits of this training and support are clear – for those inside and outside the collective. Munira, originally from Eritrea, who came to Glasgow with her two sons via a decade spent in Egypt today stands in the Soul Food Sisters kitchen, helping to prepare a range of specialities. Munira joined the team as a chef six months ago, having attended previously as a volunteer. She first learnt to cook in Eritrea and her passion for food and for Soul Food Sisters abounds. Working here has provided not just a small income but also exposure to a network of women whose knowledge and experiences have helped Munira feel at home in the city. Often Munira’s specials feature on the weekend menus, Eritrean stews or Injera – a soft flatbread served with various toppings and salads and sauces. Shortly she will start a catering course at City of Glasgow College, building upon the skills she has learnt at Soul Food Sisters and in Eritrea and Egypt. 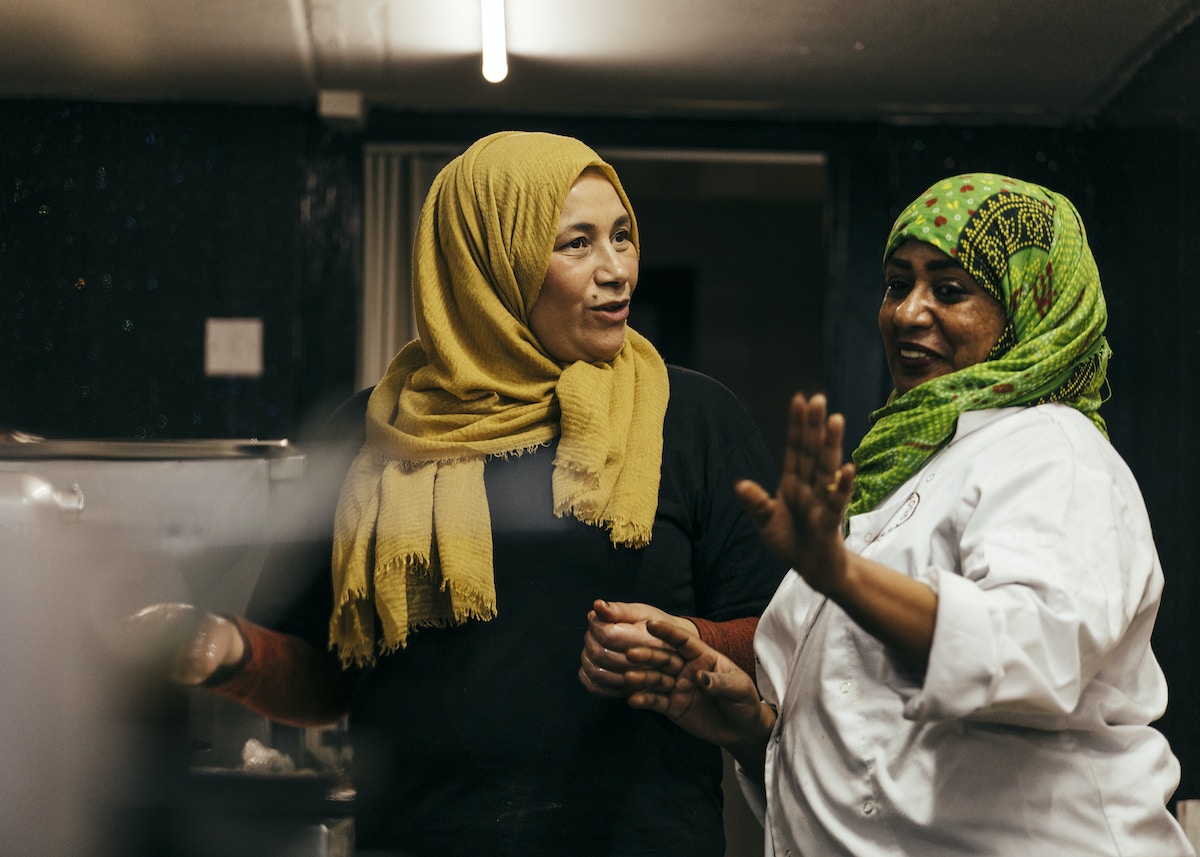 Marcelle, half Algerian and half Scottish who works both front of house and in the kitchen, welcoming customers through the doors, is quick to praise Munira’s skills. Marcelle’s father is Algerian and her mother Scottish and she spent her childhood and early teenage years in Algeria before returning to Britain where she studied French at Glasgow University. As both a French, Arabic and English speaker she converses fluently with Djamila and the other women in all three languages. In addition to working as an interpreter and a social worker, she now works at Soul Food Sisters every Saturday. For Marcelle Soul Food Sisters is more than just a café and catering company, “I think to be in a brand new country and a new culture, it’s good to have a place where you can feel a sense of belonging whether it’s to speak your own language or eat your own food. To have women support each other in the community is very important. We support one another and we give so much back.” Marcelle’s passion for food came from her paternal grandmother in Algeria who would leave the family home every Thursday to cater for vast wedding parties, returning every Sunday with leftovers of sweets and treats which Marcelle and her sister would gorge on with relish. 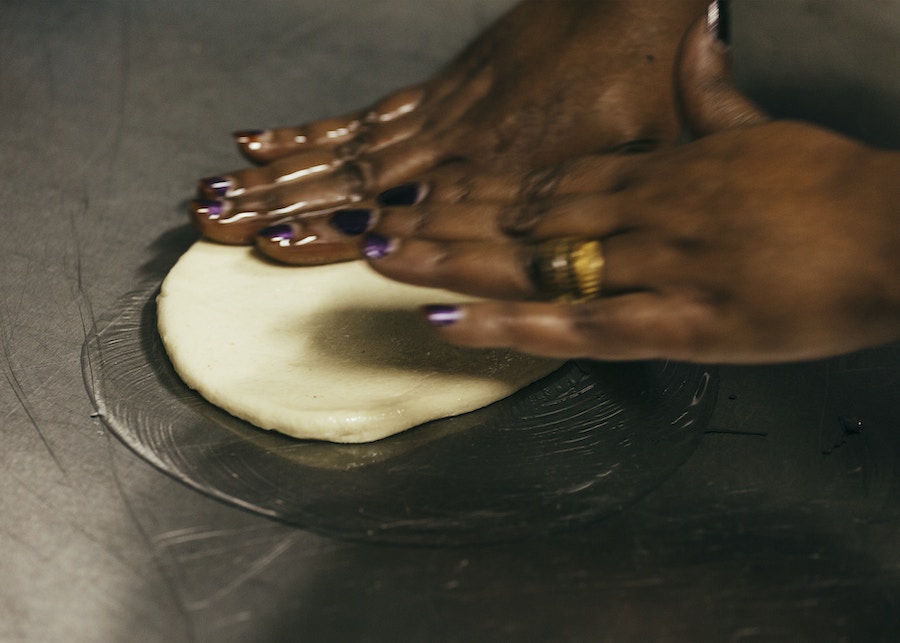 For each of these women, food is woven through memory and into identity, a means of shaping and telling one’s own story – of holding onto the past and forging a future. 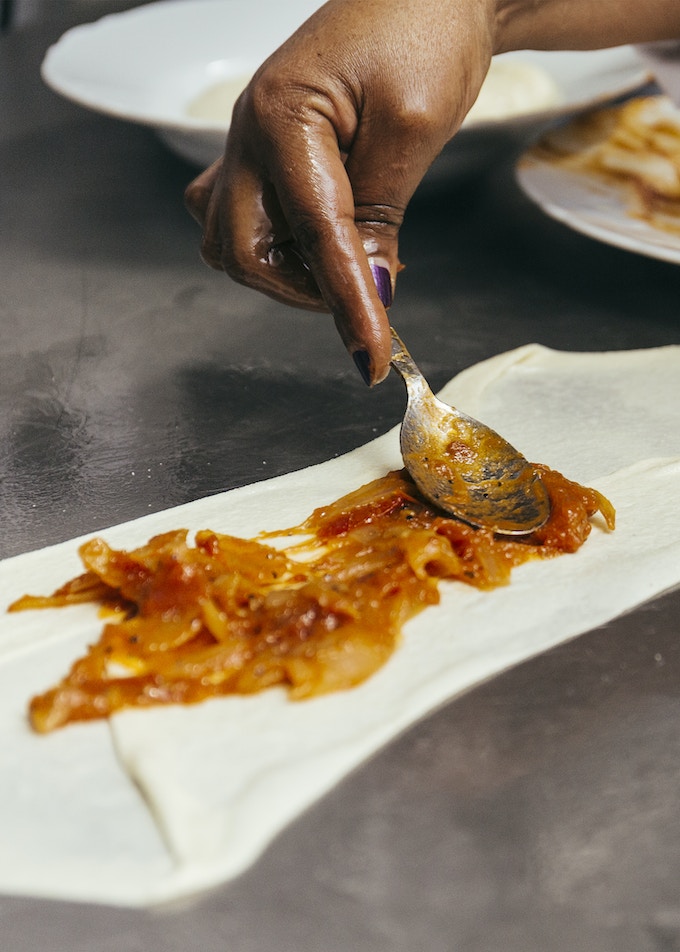 Everything is prepared here in the kitchen by hand. Djamila explains that they don’t use any pre prepared spices, rather they are bought, dried and ground individually, the way her family have done for generations. It’s the type of cookery that takes care and attention and knowledge that only comes from experience.

Soul Food Sisters is one of the latest additions to the Barras which signals that the market is gradually changing, expanding its repertoire from hot donuts and lorne sausage stalls to become a vibrant, international and socially diverse community. Marcelle recounts that, amongst the French tourists, there are still a few locals that come in asking for a roll and sausage and whether, if they bring all the ingredients for a cooked breakfast, the café will cook it for them. "How on earth would we know what to charge them for that?” she jokes, “you get all sorts here.” She and Djamila talk of the importance of their neighbours and the local businesses in making them feel welcome and offering a means of mutual support. In ever more uncertain economic times Soul Food Sisters is a potent reminder of what can be achieved with vision and determination, yet its success, like that of many social enterprises, is not guaranteed. It relies on grants and funding to help deliver its training to women and to keep its welcoming doors open for all those who wish to enjoy its food.

In a rare moment of calm, as Djamila and Munira finish off making the last of the Mhajab, Marcelle tells me, “we all have something to contribute and that’s what it takes to keep it going. We really offer something unique. I think if this shut down I’d be quite sad, it’s our livelihoods. What you see is what you get if you have something to contribute you can contribute. We have people from all walks of life who walk in. It’s a brilliant place to work and it has so much to offer for the community and those who work here.” 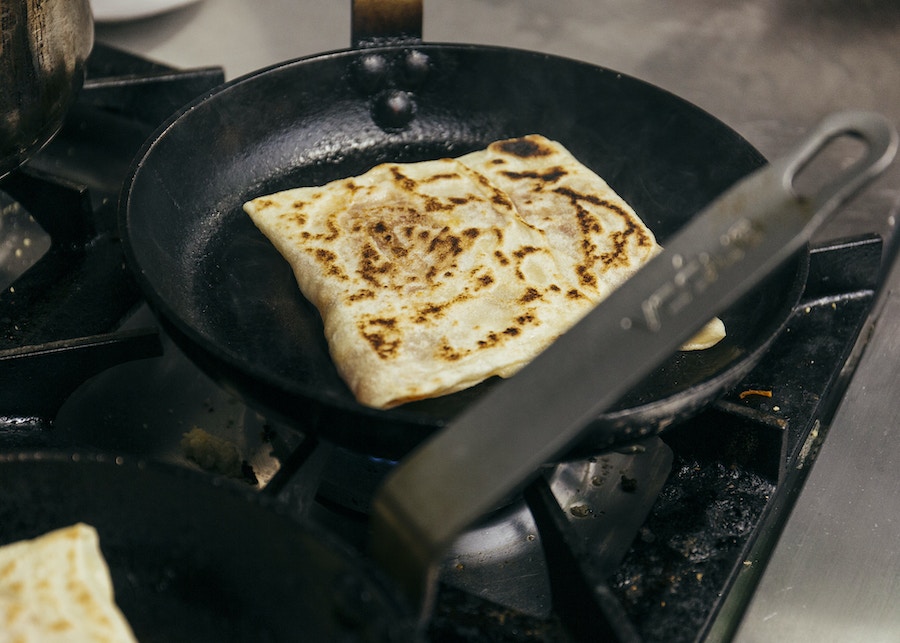 Walking back out in the crisp twilight, filled with the food and the stories from these inspirational women’s lives, the spirit, determination and warmth of Soul Food Sisters feel as characteristic of the city it calls home as the women who work tirelessly to bring their passion for cookery and togetherness to those that they meet. For Glasgow, and for the sisters, long may it continue. 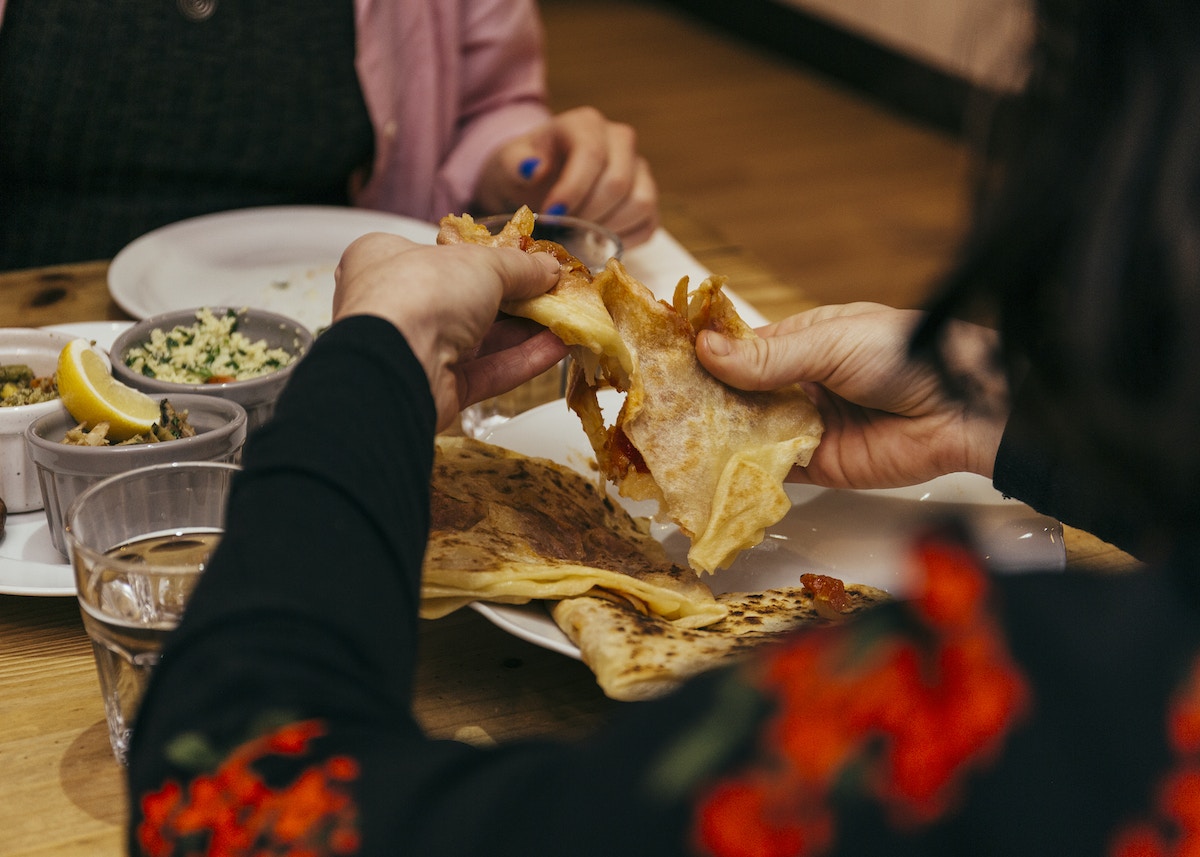 Ingredients for the crepe mixture

Ingredients for the filling

Salt and Pepper to season

For the crepe dough

Put the semolina in a mixing bowl and add the salt and water. Mix together with your hands until a soft dough has formed. When it’s bound together and in the shape of round ball, cover with cling-film and leave to rest for at least 15 minutes.

Cut the onions by hand and add to a pan. Soften then add the tomatoes to the pan and gently cook for at least 20 minutes.

Once the tomato and onion mixture has softened and reduced remove from the heat.

Remove the dough from the clingfilm and take a palm sized amount and roll out into a large crepe like shape.

Add a table spoon of the filling to the centre and fold over each side towards the middle to form a rectangle.

In a separate shallow frying pan heat some light oil and once hot fry each crepe until golden. This should take 4-5 minutes.

Serve warm from the pan. 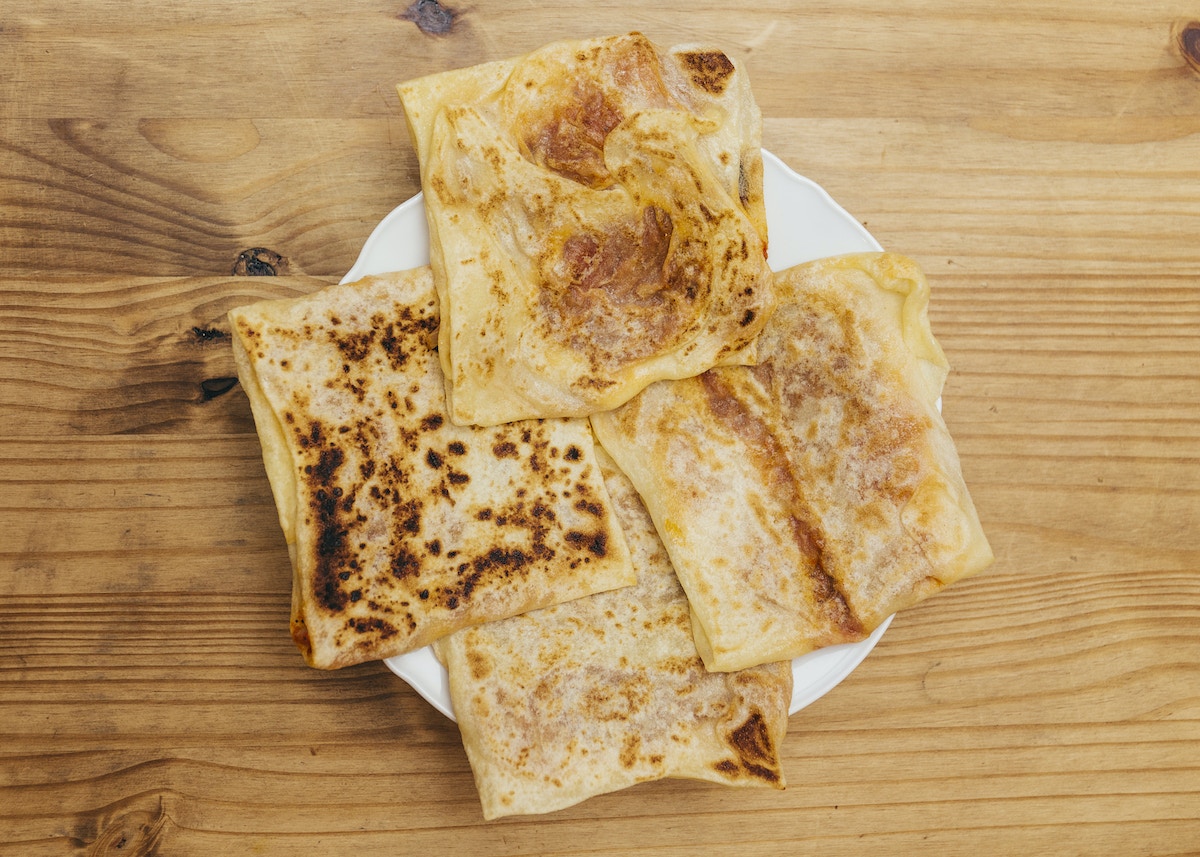